Staff member
Over here, you can't really get them anymore. Not directly in any case. Unless your doctor flags you as at-risk, there is no point even trying. Other years they don't do this but atm, they really want to prevent critical people being swept up in flu season because hospitals and care workers are overstrained as it is.

In theory, they are available for everyone here, but with the increased demand this year resources are being stretched. Many people have done the same as me: plan to get it but allow time for those who really need it to get in first. Flu shots have been generally available for (I think) a couple/few weeks here, so I figure at-risk/front-line folks would have had theirs by now.

Prioritizing those most in need makes an awful lot of sense. I can happily hunker down, work from home, and generally avoid people so I need it much less urgently than health workers or others who need to be out and about amongst people.
M

I remember 1976 in the US when the first iteration of swine flu hit the population. We weren't so far removed from the 1920 Flu Pandemic and the vaccine was rushed into production at the behest of politicians. The result was a syndrome called Guillan-Barre and the vaccine was pulled from circulation and our present vaccine manufacturing processes were instituted for very good safety reasons.

The pressure to rush a vaccine of any kind has lessons to be learned from history. I am entertained by the discussion that says that the first shots are reserved for doctors and nurses, any front line worker bees. That group probably has a memory of why early vaccines are to be avoided and I'm betting there will be resistance among my colleagues, in favor of "those who need it more than me." I am not hesitant to say, you go first.

The good news is that the influenza vaccine this year has been subject to the same rigorous safety processes for years and it's a good one. The better news is that the flu shot shows some evidence of adding some immune system stimulation that will help generally protect against Covid19 even though not a direct act specifically for that virus. Get your flu shot without fear.

Wash your hands, don't touch your face, wear your mask and keep your distance.

Swine flu (2009 version) was the best weight-loss program I have ever tried. Brutally effective, and something I'm in no rush to repeat.
M

Understood. I would not recommend it for weight loss.

Sadly in 2009 a famous network anchor controlled the airwaves for the weekend and pretty much singlehandedly put the US into a viral panic. By Monday when some (then) really well respected science types from the CDC got on the TV to calm things down, it turned out that the previous year's flu vaccination (2007-2008) contained the H1N1 strain for the very virus we were all encouraged to panic over. As an experiment in social control, the TV proved quite capable in a pre-Facebook era.

Scientifically, flu viruses evolve rapidly and there was just enough difference between the vaccine and the wild virus to cause cases to occur.

Staff member
One big advantage we have here is that a ton of research and testing was done for the original sars outbreak almost 2 decades ago.

From that pov, this vaccine is less rushed than the 1976 one. We had a running start.

That said, while the pfizer and sanofi vaccines has been tested in large control groups, i would avoid the Russian one

I got my flu shot. It seems they had enough for everyone that wanted one. As a medic, I always am able to get one and often I do. In this area with all the hand washing and face masks, I suspect our flu season will be much more abbreviated than in days gone by.
M

Yes, I believe the same, there will be less influenza this year. But then the simple barriers would reduce cases of that virus as well as the COVID we are all focused on. Less strep throat less other airborne or contact disorders are seen in acute care clinics now. d

Mike Blue said:
Yes, I believe the same, there will be less influenza this year. But then the simple barriers would reduce cases of that virus as well as the COVID we are all focused on. Less strep throat less other airborne or contact disorders are seen in acute care clinics now. d
Click to expand...

Every single year around February, I catch a doozy of a cold that settles in my chest for weeks causing a really annoying cough that refuses to go away. I'm hoping all the covid precautions this year might have a side benefit of sparing me that this year.

Staff member
My wife and i noticed a decrease in number of times that we get a cold much less than other years.
M

Not having kids in public school will reduce transmission to the home populations too. Children are simply festering human tissue cultures anyway. Well all of us really, the cruise ships of the microbiological world...

Mike Blue said:
Not having kids in public school will reduce transmission to the home populations too. Children are simply festering human tissue cultures anyway. Well all of us really, the cruise ships of the microbiological world...
Click to expand...

Getting ready to go back to work this morning.

32t said:
Getting ready to go back to work this morning.
Click to expand...

I’m glad you are back at it in a timely manner. This particular one is tricky and there is so many ways different people are being effected, it nice to see you getting off easy so to speak.

RezDog said:
it nice to see you getting off easy so to speak.
Click to expand...

Thanks you but this brings up a point I have been thinking about.

They say not to get tested again for at least 90 days because I may/would show up positive.

I feel personally that I was sick when I got tested but how many people feel sick with minor symptoms and then go on with their life? A year ago I would have gone to work after a few days.

Now if you had covid 2 months ago or more. Then you are "exposed" and you may get tested and then get a positive result. BUT you have no symptoms and are quarantined.

You don't have it. Been there done that.

Then there are the variations and I don't know which one I had. The standard flu shot is not that effective because it is a guess on which one/four are going to be prevalent this year.

I believe that I have resistance to the one I had but in 3 months will it be a different version?

To many thoughts and I will stop my rant for now!

Staff member
I remember that as soon as my kids started going to daycare, my wife and wife would literally be sick from september till april. Head colds, strep throat, stomach bugs, ... and if you have kids with stomach bugs, no matter how careful you are, after 2 days you have it too because if you have to clean them 15 times in a day, no amount of alcogel will protect you. Our immune systems got a lot stronger though.

The daycare parents for my kids looked after them from end 70s to early 80s. They also didn't take holidays because they didn't see the point anymore. Their only child died, their grandson was an adult, and they didn't like travel. So the 2 of them looked after 10 or 11 babies and toddlers from 6:30 till 18:30. They told me they never ever got sick again, on account of being immersed in toddlers every day of the year.

As an aside, it's true that every human is a cruiseship with a unique population of bioflora. I once read that the number of foreign cells in the cruiseship outnumber your actual body cells 10 to 1. I think this is why when it comes to things like digestion, allergies, reaction to drugs, people can react very differently. My friend has a son who carries staph. Apparently there is nothing they can do about it at this stage in his life and they hope it will eventually solve itself. She told me that carriers usually don't infect themselves, but apparently if he scratches his skin too bad, he gets those red pulsing infection veins in his skin like angry spiderwebs. Looks halloween-ish.
M

It is amazing that considering the "other than human" content we carry around everyday, that we don't get sicker more often. I imagine it's like Nixon and Breshnev, a detente of sorts. 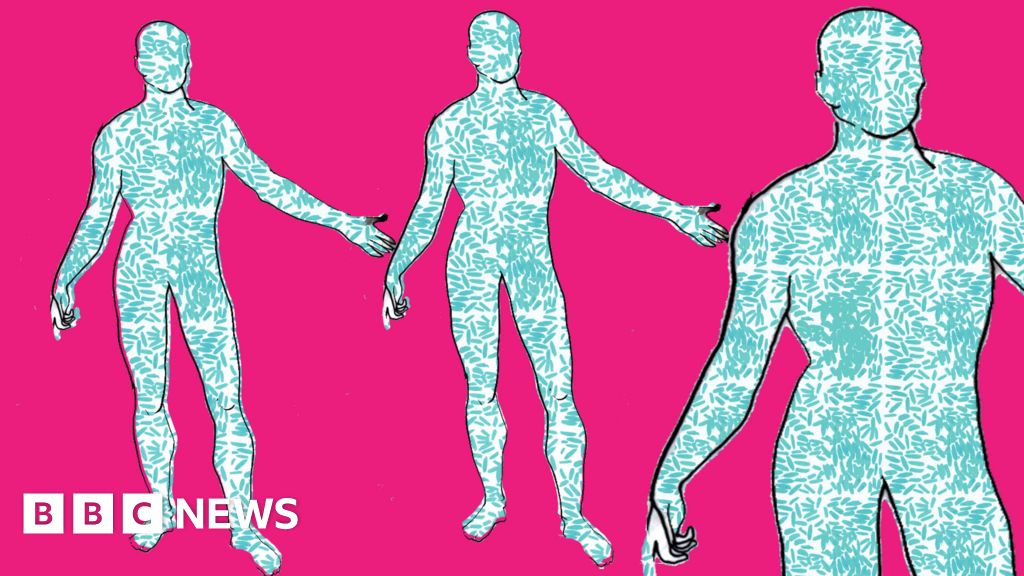 More than half your body is not human

Human cells make up only 43% of the body's total cell count, while the rest are microscopic colonists.
www.bbc.com

The BBC article is interesting at the sixth grade level of understanding (most news is written there). When I go to Infectious Disease conferences, I'm prepared with questions and pepper the questioned specialists to the point of enjoyment. The level of understanding rises a ways. And the statistics of how much is greater than most news consumers want to know.

To me a physician is a person trained in a specialized trade .

A pipe fitter or plumber etc. will perform their job just as well.
M

LOL there are cardiologists who are referred to as electricians and plumbers depending on the type of procedure they perform.